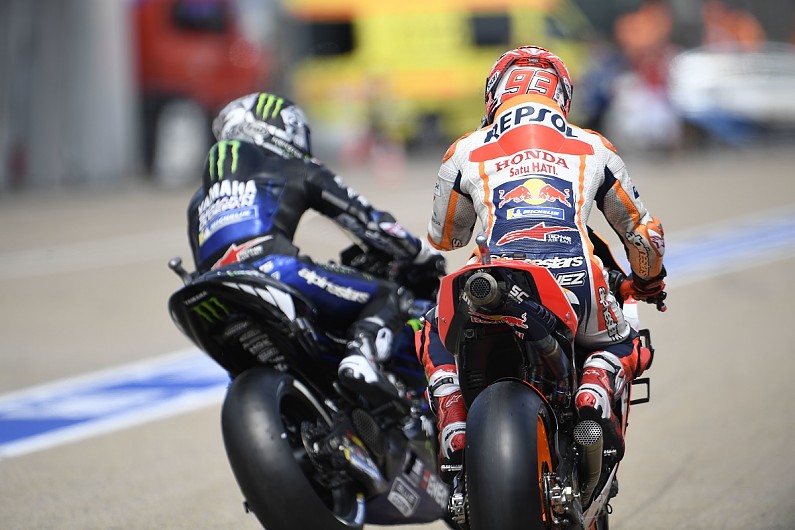 MotoGP championship leader Marc Marquez believes Yamaha riders Maverick Vinales and Fabio Quartararo will be his main competition in the second half of 2019, rather than the Ducati line-up.

Ducati’s Andrea Dovizioso has been Marquez’s main title rival since 2017, and Dovizioso is second in the standings after nine races in ’19, 58 points behind Marquez, with Ducati team-mate Danilo Petrucci close behind in third.

Ducati’s form has tailed off in recent rounds and Yamaha has moved forward with Vinales taking victory at Assen and second place at the Sachsenring, while Quartararo has taken two pole positions.

Marquez said the Barcelona race in which Jorge Lorenzo wiped out Dovizioso, Vinales and Valentino Rossi in one crash and handed the championship leader victory changed the course of the campaign.

“Until Montmelo [Barcelona] it was one championship, now from Montmelo to here it’s another championship,” Marquez said. “We have two [wins worth of points] between me and Dovi.

“Of course, Ducati will come back [stronger] and they will be very fast, but at the moment the riders to beat are both Yamahas, Vinales and Quartararo.

“I think they will be the fastest in the second part of the championship.”

Ducati’s Petrucci agreed that Vinales is now a “problem” in terms of the championship.

“I am happy about my situation in the championship because I am P3 [in the riders’ standings] and I gained some points from [fourth-placed] Rins, but he crashed,” said Petrucci.

“Now the problem is that Maverick is gaining some points but for the fight with these guys, we need something more.

“I want to work more not because I need to, but because this makes me more hungry for the rest of the season and gives me more motivation because I want to finish in the top three positions.

“It is very hard at the moment but I think we have to believe and especially at home they have to work and believe that still, everything is possible.” 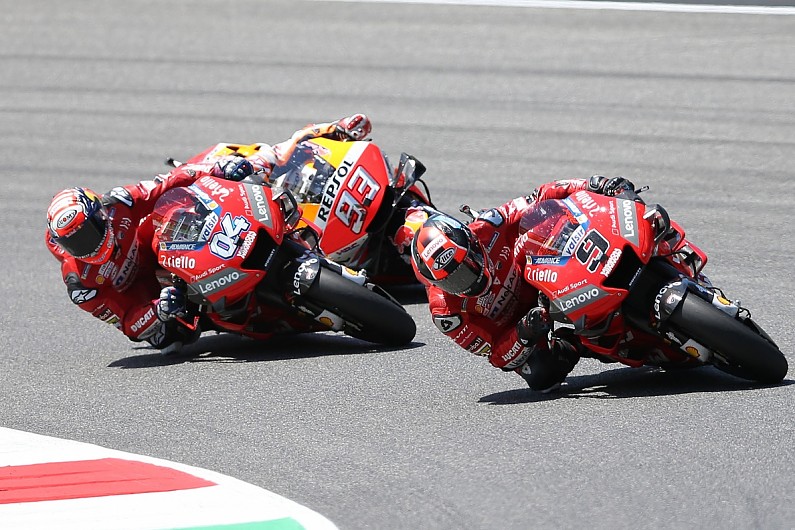 Petrucci believes Ducati will perform strongly when MotoGP resumes at Brno and the Red Bull Ring because the layouts suit its bike.

But Petrucci warned that Marquez was only beaten by a narrow margin at Qatar and Mugello, which are two tracks where Ducati has held an edge over Honda in the past.

“These two tracks [Brno and Red Bull Ring] are a little bit better compared to the past two [Assen and Sachsenring] we had,” Petrucci added.

“Marc this year made a bigger step compared to us, we fought hard with him in Qatar and Mugello where [it has] always been two Ducati tracks and the next two are the same, two Ducati tracks.

“But in Qatar and Mugello we won by thousandths. We need to give all for trying to keep the championship open.”