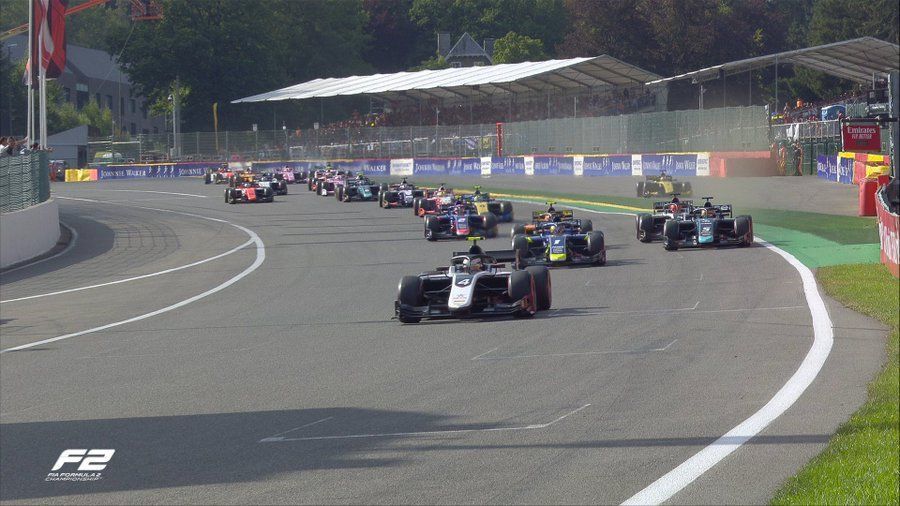 American driver Juan Manuel Correa and Renault development driver Anthoine Hubert were left with the most damage. Giuliano Alesi and Ralph Boschung’s cars both returned to the pits with a puncture, while Marino Sato walked back to the paddock after being involved in it.

Medical crews arrived at the scene shortly after the accident. Fan videos from the circuit showed Hubert losing control of his car on the exit of Raidillon and being collected by Correa at full-speed at one of the fastest corners on a racing circuit in the world. The crash split Hubert’s car into two pieces.

Raidillon is a blind section of race track on the crest of a hill which follows the fearsome Eau Rouge corner, which F2 cars can take flat-out. At the Kemmel Straight which follows, F2 cars can top out at 200km/h, meaning the accident would have occured in upwards of 250km/h.

TV cameras quickly cut away from the scene, and no replays were shown. The race was immediately red-flagged and, once the other cars had returned to the pits, it was soon confirmed the race would not restart.

Correa was born in Ecuador but moved to Miami aged 9. He races under the American flag. The 20-year-old is part of the Sauber junior programme and just last month tested a 2013 F1 car in a test arranged by Alfa Romeo, which Sauber’s F1 team was renamed ahead of the current season.

Frenchman Hubert, who won the GP3 championship in 2019, has won two races in F2 last year. He was picked up by Renault’s development programme last year and named a full member of the academy this season.

Renault cancelled all its F1 media sessions on Saturday afternoon. The crash occurred shortly after the conclusion of qualifying for Sunday’s Belgian Grand Prix.

There has not been an update on the medical condition of either Correa or Hubert.

*This report will be updated*

Bratches to step down as F1’s commercial boss
Retired three-time champion Jorge Lorenzo to be made MotoGP legend
Santiago E-Prix: Gunther grabs win with last-lap pass on da Costa
Ocon on his new start at Renault, his relationship with Verstappen and how close he came to a Mercedes drive
Ferrari signs Leclerc’s brother to its F1 junior programme