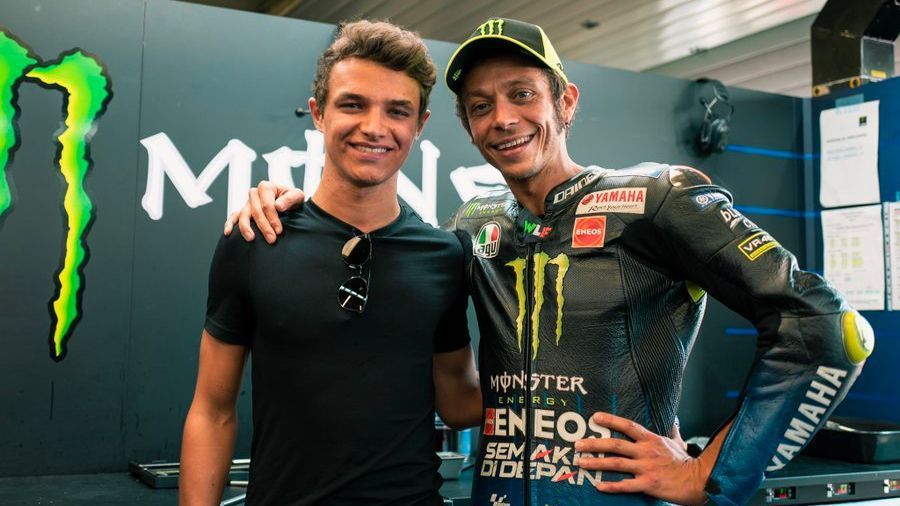 MONZA, Italy — The Formula One paddock is a busy place that hosts a lot of serious business over a race weekend, but this here we try to bring you some of the news stories you might otherwise miss ahead of the Italian Grand Prix.

F1 rookie driver Lando Norris will run a Valentino Rossi tribute helmet for this weekend’s race in tribute to his boyhood hero. The Englishman’s lid will the trademark sun logo and traditional blue and dayglo colours of the seven-time Moto GP champion.

Lando has @ValeYellow46 colours this weekend at Monza in tribute to his hero pic.twitter.com/bi96UHp7qL

When in Italy, wear something a little @ValeYellow46 😉🇮🇹 #VR46 #LN4 pic.twitter.com/WFIokAbDVQ

Norris, 19, revealed the new design on Thursday ahead of this weekend’s race at Monza.

Norris met MotoGP legend Rossi during that series’ British Grand Prix at Silverstone last month and has made no secret of his affinity for the Italian rider since, recently appearing on a Twitch stream while dressed head to toe in Rossi merchandise featuring the Italian rider’s iconic number 46.

Did I mention that I’m a fan of @ValeYellow46 yet, or not…? pic.twitter.com/LglJ2uzXkb

It’s hot outside. Stay hydrated and collect as much merch as you can #BritishGP #MotoGP pic.twitter.com/6yEaARSEKo

Norris went on to explain his thinking behind it.

“I’ve always loved doing my own kit,” he said ahead of the race this weekend at Monza. “In karting I used to have different helmets, suits and boots, sticker kits, but you get more limited with what you do in car racing. But even now, for the races I can, I want to have a special helmet or boots or something.

“I already spoke to Valentino quite a while ago, just on social media, trying to sort this – because I obviously had to ask him if I could do that.

“It was an opportunity to make this race more special and more of a one off and something to remember it by, and that was by having more of a connection with Valentino, the guy I’ve always looked up to, my hero. So it is more of a dedication to him than anything else.”