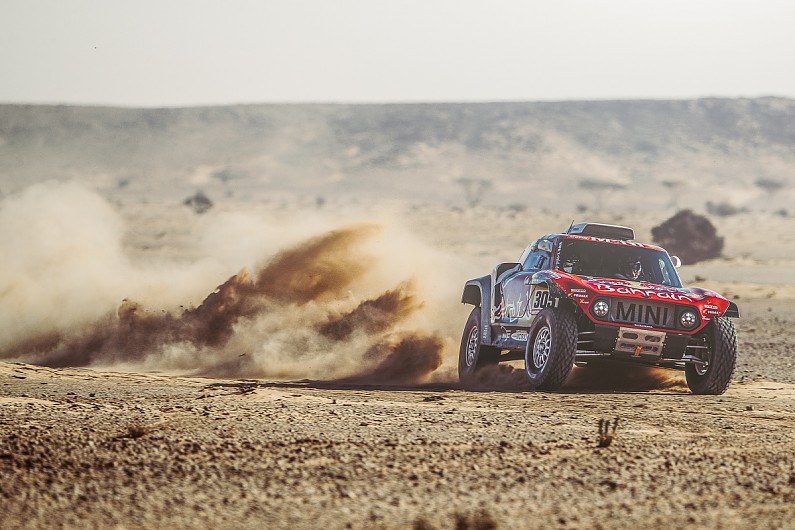 X-raid Mini driver Carlos Sainz has picked up his third stage win of the 2020 Dakar Rally to further extend his advantage at the top of the general classification.

Sainz, chasing his third Dakar win, picked up where he had left off in the first half of the marathon and delivered Mini’s sixth stage win from seven so far in this year’s event.

Sunday’s Riyadh – Wadi ad-Dawasir run featured the event’s longest timed special at 339 miles, but the length did not lead to any major swings in the battle for overall victory.

The Toyotas of reigning champion Nasser Al-Attiyah and local driver Yasir Seaidan set the pace through the first half of the test, but Sainz jumped ahead soon after the midway point and at the finish ended up beating Al-Attiyah by two minutes.

Sainz’s advantage over Al-Attiyah in the overall standings is now exactly 10 minutes.

The other X-raid Mini buggy of Stephane Peterhansel opened the road and although Sainz caught up to him in the stage, Peterhansel minimised his time losses by finishing just 2m53s slower, which leaves him nine minutes off Al-Attiyah and 19 off Sainz with five stages left to run.

Sunday marked the fourth successive stage where the two Mini buggies and Al-Attiyah occupied the top three spots, but Bernhard ten Brinke came close to upsetting the status quo in his Toyota as he trailed Peterhansel by just five seconds.

Yazeed Al-Rajhi in the Overdrive Toyota finished seven minutes off Sainz’s pace and continues to run a comfortable fourth in the general classification as he extended his advantage over fifth-placed Orlando Terranova in the Mini 4×4.

Mathieu Serradori, who had started the day in sixth in his Century buggy, has slipped behind his Toyota chasers – Giniel de Villiers and ten Brinke – as a result of getting stuck on a dune in the opening miles of the stage.

Seaidan, who had been fastest early on the stage, wound up finishing 13 minutes adrift at the end.

Two-time Formula 1 champion Fernando Alonso was sixth on the day, finishing less than eight minutes behind Sainz, and is set to end Sunday not far off a top-10 spot in the overall order.

Sunday’s proceedings were overshadowed by the death of bike class competitor and 2015 Dakar runner-up Paulo Goncalves, who passed away following a crash midway through the test.